French literature has received a lot of attention lately from an unexpected source—economists.

From Thomas Piketty’s surprise 2013 bestseller, Capital in the Twenty-first Century, to Priceless Markets, a 2000 book by Philip Hoffman, Gilles Postel-Vinay, and Jean-Laurent Rosenthal, economists are turning to literary works for examples of historical income inequality and emerging financial markets.

Julia Douthwaite, a professor of French in Notre Dame’s Department of Romance Languages and Literatures, wants to evaluate their interpretations and delve deeper into literary representations of money.

Douthwaite has received a fellowship from the National Endowment for the Humanities—her second—for her book project on the topic, tentatively titled Financiers We Have Known: A Capitalist History of Literature.

“Some humanists may be annoyed by the economists’ reduction of art to historical evidence, but I find it intriguing to see them reading around on our ‘turf,’” she said. “And I want to explore some of their findings with a literary eye.”

The origins of financial worries

Both Capital and Priceless Markets examine the 19th-century novels of Honoré de Balzac to identify the hopes of those aspiring to join the elite upper class and the fear of bankruptcy felt by the have-nots.

But Douthwaite argues that to truly understand those emotions connected to money, one must look at their origins in the 18th century and their successors in the 20th and 21st centuries.

“Before determining fiction’s ability to capture feelings,” she said, “we should inquire where economic worries came from, who generated them, and what forms they later took.”

Douthwaite will begin her research in the French Regency era—a pivotal moment in French capitalism. The reforms launched in 1719–20 by Scotsman John Law caused the first boom and bust in asset prices and cast a long shadow over the years ahead.

Inspired by the work of Cambridge economist Ha-Joon Chang, she hopes to illustrate his point that “the history of capitalism has been a constant struggle over the boundaries of the market.” In her book-in-progress, she plans to explore how value is associated to certain products and social profiles (and not others), and how the marketing of elitism depends on socio-political factors to succeed.

The impact of money 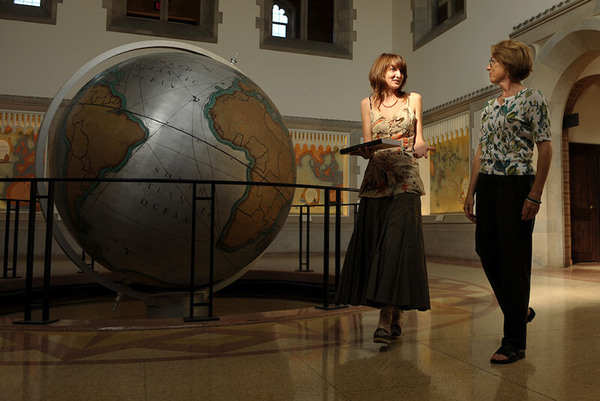 Douthwaite first became interested in finance after reading Piketty’s work. Intrigued, she decided to further explore the link between the humanities and economics.

She has since presented her research at two conferences and taught a graduate seminar, Money Matters in Literature, in spring 2016.

“In the seminar, we talked about the role of money in Old Regime French literature, beginning with LaFontaine’s fables and fairy tales; we read Puss in Boots—which has interesting things to say about wealth and how to move up in the world through patronage,” she said. “It was wonderful to be able to work through these texts with such bright students and amazing what we discovered together.”

Her book will build on some insights from that class, to trace how the changing concept of a cultural aristocracy or elite—found in great novels from 1721 to 2013—has promoted different economic principles and thus elicited strikingly different reader reactions over time.

Douthwaite has incorporated her finance research into a series of writing workshops she leads for local school children and in an illustrated book of fables, titled Hey, LaFontaine! Are You Ready for South Bend? Classic French Fables Retold for Our Day.

She is also planning a lecture series and an interactive art exhibit on the way money impacts lives, following the successful model she created when bringing the DIGNITY project to campus in 2012. Presented at the Snite Museum of Art in early 2018, the exhibit will feature works of art focused on wealth and inequality, as well as a multimedia room with music, clips from TV shows, and a video game designed for the event.

“The whole point is to show people how arbitrary the relationship between money and value is,” Douthwaite said. “It’s fiction; it’s based on air and nothing more. We want people to consider capitalism—and why we all buy into our notion of value being tied to our net worth or our car or our ZIP code.”

“The whole point is to show people how arbitrary the relationship between money and value is. We want people to consider capitalism—and why we all buy into our notion of value being tied to our net worth or our car or our ZIP code.”

The spark of creativity

In addition to previous NEH funding, Douthwaite has received grants from the John Simon Guggenheim Memorial Foundation and the Lilly Foundation. She also received the Sheedy Excellence in Teaching Award, the highest teaching honor in the College of Arts and Letters, in 2013.

Douthwaite focuses her research on the French Enlightenment, the Revolution, and French-English relations in the 18th and 19th centuries, and she has written three previous books—most recently The Frankenstein of 1790 and Other Lost Chapters from Revolutionary France (University of Chicago Press, 2012). She has also edited a book related to the DIGNITY Project, titled Rousseau and Dignity: Art Serving Humanity, which will be published in January 2017.

She is excited about the interdisciplinary and creative aspects of her current research, which allow her to connect with a much wider audience.

“As I become more experienced, my goal as a writer and a teacher is to become more bold and more brave,” she said. “I want to find creative ways to take these great works of the past and bring them into dialogue with our time.

“And money is a universal. It’s always of great importance, and it’s of interest to everybody.”