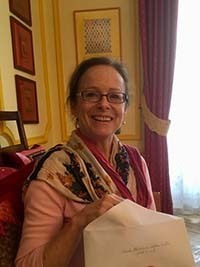 Julia Douthwaite Viglione, Professor Emerita of French and Francophone Studies, is an expert on the French Enlightenment, the Revolution, and 19th-century France, and a winner of the Charles E. Sheedy Award for Excellence in Teaching (2013). After 27 years in South Bend, she retired from Notre Dame in July 2018 and returned to her hometown, Seattle, WA. She currently channels her literary inspirations and eye for aesthetic detail into a small business, “Honey Girl Books and Gifts” which produces children’s books and designer quilts: https://www.honeygirlbooks.com/

Honey Girl Books and Gifts publishes short illustrated books that bring scholarly discoveries, and fresh versions of classic novels, to younger readers. They are illustrated by young or up-and-coming artists. The first book, based on the author’s research in The Frankenstein of 1790 (Univ. of Chicago Press, 2012), was published in November 2018 as The Frankenstein of the Apple Crate and ranked #1 by Amazon for Children’s European’s Historical Fiction / Biography.

It is an all-Notre Dame affair, written, illustrated, and translated by ND faculty and alums!! (Karen Neis, Vincent Jauneau, Jeremy Llanes Dela Cruz are alums; Eileen Botting and Greg Kucich are faculty in Political Science and English). Available on Amazon and via Honey Girl Books and Gifts. https://www.amazon.com/Frankenstein-Apple-Crate-Possibly-Monsters/dp/0998443298

The Frankenstein of the Apple Crate: A Possibly True Story of the Monster’s Origins, illus. Karen Neis. Historical and Biographical Notes by Eileen Hunt Botting and Greg Kucich. 36 pages, 33 illus., ages 8 and up.

While at Notre Dame, she had an interesting, lively career.  Her most recent book, The Frankenstein of 1790 and Other Lost Chapters from Revolutionary France (University of Chicago Press, 2012), shows how key events of the French Revolution took shape through newspaper and imagery produced during the turmoil, and how those same events were later retold by authors such as L. Frank Baum, Mary Shelley, Honoré de Balzac, and Charles Dickens.  A French edition, Le Frankenstein français et la littérature de l'ère révolutionnaire (translated with the help of former students Pierre André and Alexane Bébin) was published in 2016 by Classiques Garnier, Paris.

She received grants from the John Simon Guggenheim Memorial Foundation, the Lilly Foundation, and the National Endowment for the Humanities (two year-long fellowships and one summer stipend).

In 2011-12, she organized the American début at Notre Dame of the exhibit entitled DIGNITY: Human Rights and Poverty, co-sponsored by Amnesty International France, which was first displayed at the Hôtel de Ville, Paris, in 2010. A companion volume, Rousseau and Dignity: Art Serving Humanity, is now available.

A  volume that she edited for the Modern Language Association’s Options for Teaching series, with Antoinette Sol and Catriona Seth,  Teaching Representations of the French Revolution, is now available: https://www.mla.org/Publications/Bookstore/Options-for-Teaching/Teaching-Representations-of-the-French-Revolution

PDFs of all her publications may be found on academia.edu.

Readers may be interested to know that Dr. Douthwaite Viglione's writing on revolution and human rights has forged a lasting dedication to her local community. Inspired by the photographers she met while working on the DIGNITY project, she created a free weekly writing workshop for kids ages 8-12 called “Write YOUR Story.”  After six successful years of co-teaching “Write YOUR Story” in South Bend, she is now offering the class to Seattle kids!