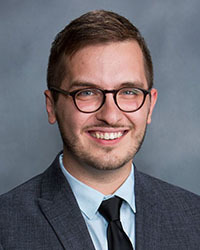 Robert Myak graduated with his B.A from the University of Notre Dame in 2017.  He specializes in nineteenth and twentieth century peninsular literature and cinema, with a special emphasis on the literature of the Spanish Civil War and historical memory.  Furthermore, related to historical memory, he is interested in the silence of the Civil War and Francoism following Spain’s transition to democracy

Thanks to funding from the Nanovic Institute for European Studies, Robert researched in Spain in early 2017 and successfully completed a senior thesis entitled “Ecclesiastical Corruption and Survival in Leopoldo Alas’s La Regenta”.  His thesis offered a rereading of the novel’s protagonist, considering the relationship between modernity and the representation of the Catholic Church.

His current research project focuses on the creation of alternative realms in the literature of the Spanish Civil War.