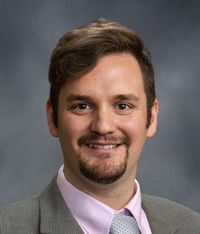 His research interests are focused on the minor Italian novelists and poets of the XIII-XV centuries: the primary goal is to describe the generative relationships that relates the three crowns (Dante, Petrarca and Boccaccio) with the “minors”, in order to understand what in their texts derives by the three precedents and what is innovative, therefor remarkable. This work will help to better understand the real diffusion and reception of Dante, Petrarca and Boccaccio in their minor colleagues’ production, not just thematically, but linguistically and syntactically too.
His secondary but not less important interest is editing critic editions of Italian authors of that period: he’s actually still working on rebuilding the text of the Pecorone, with the intention to complete soon its critic and commented edition.

Nicola was born and raised in Bergamo, Italy, on 1987; on 2013 he moved to Venice, Italy, then to South Bend on 2018. Nicola has a long marching and teaching experience in the world of the marching bands and drum and bugle corps: his marching career started on 2005 in an Italian corps, Millennium (until 2011); on 2008 he marched with the Crossmen drum & Bugle Corps (San Antonio, TX, www.crossmen.org), 28 times DCI World Class finalist; on 2017 he marched Juliana (The Netherlands), a perennial top-5 Drum Corps Europe finalist. On 2013 he taught to the Colt Cadets Drum & Bugle Corps (Dubuque, IA, www.colt.org), several times DCI Open Class finalist; for this group he has also redesigned the closer of that year show. In the past ten years Nicola flew around fifteen times to the USA in order to both march and teach in the Drum Corps International World Championship, the Marching Music Major League (www.dci.org): Nicola has been the only Italian tech in DCI in the entire the history of this activity. In his drum corps/marching band career Nicola has been Drum Corps Europe’s ambassador in the European Continent, and its Italian website and social media manager for six years; councilor of the Italian Marching Show Band Association, with the task of promoting training and technical development of the Italian groups; drill designer and visual caption head for several Italian and European corps (Mosson, Brianza, Red Devils, to name someone), and Band Director of Brianza from 2014 to 2016. On 2013 he has published for the Italian Marching Show Band Association a Visual Manual for Marching Band and Drum Corps, the unique existent in Italian language.