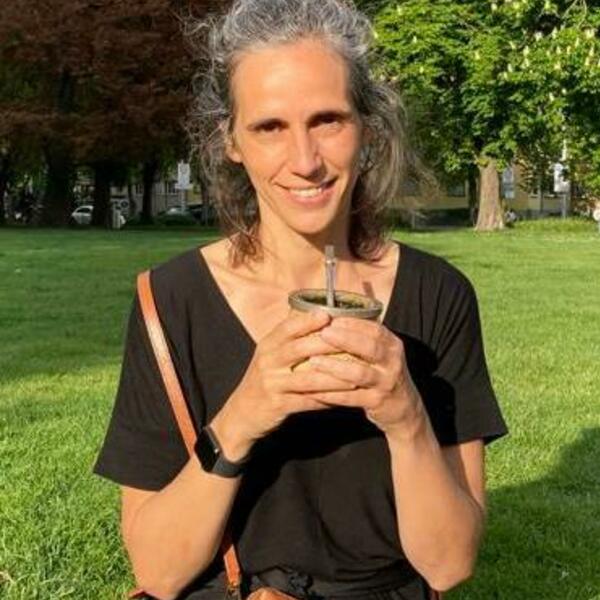 I have been teaching Spanish as a foreign language for the last thirteen years. I have taught in the US, Germany and once again ‘here’. I love what I do, and (re) learn from my students and their culture(s) more effective ways to teach. I was born and raised in Tucumán, Argentina. I grew up in Chuscha, a northern rural area. I went to a school with a diverse community, which included Bolivian children who spoke, beside Castilian, their native languages (Quechua/ Aimara). Early on, I learned the world is one, but not the same for everybody.

I graduated from a special university-depended high school as a Fine Arts Teacher. I continued my studies in Fine Arts, specialized in painting and contemporary art. In my Bachelor, I learned about Latin American Art history and cultural heritage, and became aware of the imprint culture has in art. Later on, I became interested in the actual need for making visible the contemporary local art production focused on cultural activities management. Eventually, my interest in visual arts was extended to literature, namely both are intersect by culture. Before being able to study at the university level in the US, logically I had to prove my English proficiency, and that is when my interest in languages started to grow further. In the US, I completed my MA studies in Languages, Literatures and Cultures, where I condensed my attention in the Art-Literature interface through the literary and visual production of the 20 th Argentinean poet Alejandra Pizarnik. As Spanish Graduate Teaching Assistant, I discovered the joy of teaching my native language, and became interested in teaching methodologies and language acquisition. Eventually, my work as a Spanish instructor and the personal challenge of being a Spanish professor in Konstanz, Germany, (learning my second foreign language as an adult) brought me closer and closer to the field of Linguistics, where the fields of second language acquisition research and pedagogy meet. I pursued my second Master in General Linguistics. Currently, I am writing my thesis on Spanish diachronical change: the case of Argentinean verb “saber” (to know) as an aspectual marker.

Thesis: “Re-Removal of the Stone of Folly: Analysis of Pizarnik’s Drawings”