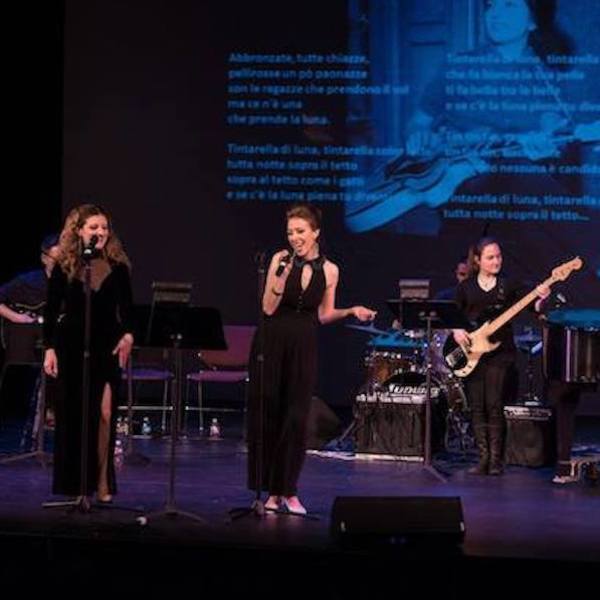 Lesley Marcantonio has been teaching Italian language at Notre Dame since 2014.

She specializes in teaching language through music, tracing the history of poetry, song, and music in Italy from the beginning of the 20th century to the present.

One of the highlights of each academic year is the Italian spring concert for which she is the producer as well as musical director and a performer. In the last four years, the Italian Studies program at Notre Dame, and the department on the whole, has seen the power of music as a pedagogical tool in the foreign language classroom. Past concert themes have included “An Evening with Mina”, “Ribelli e Rivoluzionari: The Role of the Artist in Italy”, “Singing the History of Italy”; the 2021 concert “Mediterranean Sì: Italianità in Italy and the World” will examine through music Italian culture as an extremely diversified thing, made up of different ethnicities and languages, with a focus on Mediterranean migration past and present.  The concert has brought the South Bend Italophile community together with our department in the way that only music can do, including bringing together Notre Dame undergraduate Italian language students with local grade school students to learn Italian together and perform a song on stage.

Marcantonio's  scholarly aim as an Italianist is to engage a wider range of voices and disciplines—academic and more broadly cultural influences—so as to call forth the best, most disruptive questions about the human condition. She has focused on the methodological shift from strictly literary studies to interdisciplinary readings that evoke new forms of knowledge from a text, especially texts so extensively commented upon as Dante’s oeuvre and Mozart’s operas. Her BA in Medieval Studies at the University of Notre Dame focused on Dante. For three years she also studied opera and classical music with a vocal performance concentration. At the University of Bologna, she studied the philology of bestiaries reflected in Dante’s Comedy and also Italian food culture. During her graduate work at The University of Notre Dame she continued food studies, translating Renaissance recipes and banquet menus.

She completed her graduate work in Italian Studies at the University of Notre Dame focused on Dante’s influence on Italian opera as exemplified in Mozart and Da Ponte’s Don Giovanni.  She has taught Italian language at various levels as well as a comparative literature course centered on the relationship between religion and literature. Recent publications include the chapter “Christ as Turning Point in Dante’s Commedia” with Vittorio Montemaggi in the book Illuminating Jesus in the Middle Ages (Brill, 2019).

Marcantonio has been trained in commedia dell’arte performance at the Dell’Arte International School of Physical Theater in Blue Lake, California. Performance, as a performer or audience member, is one of Marcantonio's great joys!