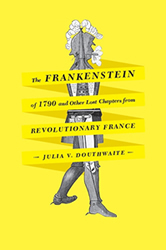 The French Revolution brings to mind violent mobs, the guillotine, and Madame Defarge, but it was also a publishing revolution: more than 1,200 novels were published between 1789 and 1804, when Napoleon declared the Revolution at an end. In this book, Julia V. Douthwaite explores how the works within this enormous corpus announced the new shapes of literature to come and reveals that vestiges of these stories can be found in novels by the likes of Mary Shelley, E. T. A. Hoffmann, Honoré de Balzac, Charles Dickens, Gustave Flaubert, and L. Frank Baum.

Deploying political history, archival research, and textual analysis with eye-opening results, Douthwaite focuses on five major events between 1789 and 1794—first in newspapers, then in fiction—and shows how the symbolic stories generated by Louis XVI, Robespierre, the market women who stormed Versailles, and others were transformed into new tales with ongoing appeal. She uncovers a 1790 story of an automaton-builder named Frankénsteïn, links Baum to the suffrage campaign going back to 1789, and discovers a royalist anthem’s power to undo Balzac’s Père Goriot. Bringing to light the missing links between the ancien régime and modernity, The Frankenstein of 1790 and Other Lost Chapters from Revolutionary France is an ambitious account of a remarkable politico-literary moment and its aftermath.