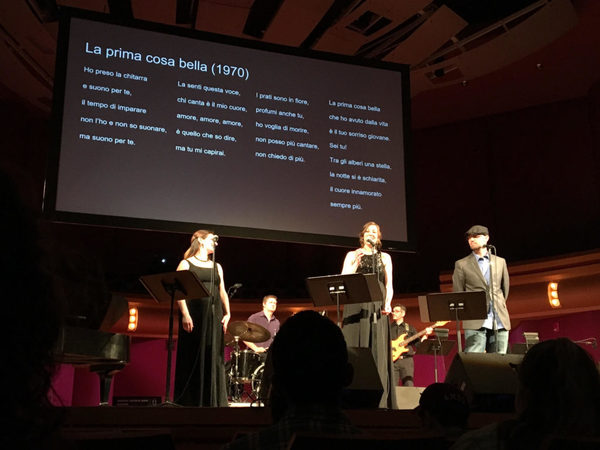 This past Friday, the faculty and students of Notre Dame’s Department of Romance Languages and Literature came together in DeBartolo Performing Art Center’s Leighton Concert Hall to perform a wide variety of fantastic Italian music for a sold-out crowd.

The event recognized artists such as Mina, Jovanotti and Lucio Dalla, who represented the voices of Italy’s people during times of social unrest. The songs came from a wide range of time periods and genres, from the 1940s to the 2000s, and pop, folk, rock and romantic music.

Returning performers included singers Anne Leone, Lesley Marcantonio and Patrick Vivirito, who were accompanied by musicians Joseph Rosenberg, Anthony Monta, Patrick Falvey and JJ. Wright. Talented new singers, junior Colin McCarthy and sophomore Veronica Perez, joined the line-up this year. A screen behind the performers projected the lyrics of the songs in Italian so that the audience could sing along, contributing to the warm and inviting atmosphere.

Some of the performances were introduced by Notre Dame faculty members, who shared personal stories associated with each song. Italian Professor Alessia Blad’s introduction to “Bella ciao” discussed her grandfather’s involvement in the fight against Mussolini’s fascist regime. These monologues added a personal touch to the songs, which further enforced the importance of music’s role in learning about other cultures.

As any student of Italian language and culture will tell you, Mina forms an essential part of the Italian musical canon. A dominant figure in Italian pop music from the 1960s to the mid-1970s, Mina is one of Italy’s most beloved artists. One of the best performances of the night was Leone’s rendition of Mina’s “Insieme.” Professor Christian Moevs introduced her as “Notre Dame’s own Mina,” and he was telling the truth. Leone sold the emotion of the love ballad perfectly, proving to be an Italian diva in her own right.

Perez and Vivirito expertly brought an upbeat duet to the concert repertoire with Jovanotti’s “Ti sposerò.”

Marcantonio and the special guests of the night, the adorable second graders of South Bend’s Darden Primary Center, sang a classic Italian children’s song, “Il coccodrillo come fa.” The singer led the kids through a song describing the various sounds different animals make as they danced on stage with a crocodile. The performance had the audience laughing, clapping and singing along. Together, this group proved the old adage that music is a universal language.

The concert was also an opportunity for the musicians to show off their talent. “Piccolo uomo,” a rock ballad sung by Leone, included an epic guitar solo from Rosenberg. Marcantonio declared Rosenberg a “gentle PLS professor by day, and shredding guitar player by night.” After his solo, no one could deny it.

It was Moevs who best summed up the reasons for coming to see this amazing concert, and for returning every year: “Keep singing Italian songs and you’ll be bilingual, you’ll be Italian, you’ll know Italy. And you’ll have fun.” The annual concert is a must see for those interested in learning more about different cultures and discovering the wonderful talent of our Notre Dame family. “Bravissimi!”