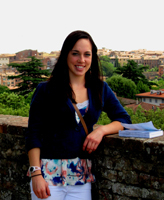 Notre Dame junior Elizabeth Barron left for Siena, Italy, this summer with two years of Italian under her belt and a desire to experience life in another country. She returned to campus in August with valuable cultural insights, measurable advances in language proficiency, and real-world skills she can apply to her future career in medicine.

As a participant in the Summer Language Abroad (SLA) program for College of Arts and Letters students, Barron combined intensive coursework at Dante Alighieri language school with a variety of engagement opportunities designed to enhance her understanding of the country’s language and culture.

One of the highlights, she says, was experiencing the Palio of Siena—an annual horse race that dates back to the 14th century. "I was able to speak with many Siena natives, who explained to me the traditions, celebrations, joys, and angst of Siena’s Palio history. It was amazing to see the passion these people have for their city and their ancestry."

Barron, an Italian minor majoring in pre–professional studies and psychology, also interned at the local hospital in Siena, where she was able to polish her language skills while observing surgeries, shadowing doctors, and interacting with patients. She even served as a translator for some Americans in the orthopedic emergency room, a task she would have struggled with just a few weeks earlier.

"When I first arrived in Italy, I could communicate enough and understand when people were talking slowly," Barron says. "However, I was uncomfortable speaking, and my vocabulary wasn't very strong."

By living, studying, and interning in Siena, she made significant progress in just a few weeks—and is now even dreaming in Italian. "That's a sign that you are almost fluent," she says.

Barron is one of the dozens of Arts and Letters students who have benefited from SLA since the College and its Center for the Study for Languages and Cultures (CSLC) launched the program three years ago.

"This rigorous program of study is unique among Notre Dame’s international programs and one of only a select few providing comprehensive and research–driven language study abroad in the nation," says Lance R. Askildson, director of the CSLC and associate professor of practice, second language acquisition.

More importantly, he says, the program has seen significant impact in qualitative as well as quantitative outcomes.

Senior French and psychology major Dan Harper says his skills were "low to intermediate" before he spent the summer at l’Université de Paul-Valéry III in Montpellier, France. "Upon returning, I had improved to advanced—which I was really excited about," he says. 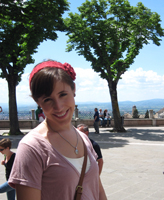 "It’s insane how much of a difference six weeks makes," adds Carolyn Caballero ’11, who went to Siena, Italy, on an SLA grant in 2010 and saw her test scores—and confidence—improve dramatically.

"When I first got there, I could never get anyone to understand me," she says. "Toward the end of my stay, I had a discussion with one of my teachers about whether altruism existed, and when I explained myself, he said 'that made perfect sense, I get what you mean.’

"I felt really proud of myself for getting that across. I felt more in control with the language itself."

Raised in a predominantly Spanish–speaking Miami community, Caballero says she applied for the SLA program because she knew that daily interactions with native speakers are the key to truly understanding a new language.

"You can’t take four years of Spanish and think you know it," she says. "You have to experience dialect, questions coming out of left field, and thick accents."

The SLA program also offers the opportunity to learn about another culture firsthand, which can be an eye-opening experience, Caballero says. "Living in Siena made me realize that my American values and my Hispanic values just aren’t enough for comprehending the world."

Barron says she, too, feels fortunate to have experienced the Sienese culture on multiple levels, whether it was witnessing the Palio or tasting exotic honeys in Tuscan hill towns or hearing the perspectives of Italian patients who had been stationed in the United States during World War II.

"Experiences like the Summer Language Abroad program are integral to a classic liberal arts education," notes John T. McGreevy, I.A. O’Shaughnessy Dean of the College of Arts and Letters. "They are a key to broadening students’ intellectual and cultural horizons both now and once they enter their chosen professions.

"Precisely because Catholicism is the world’s most multicultural and multilingual institution," he says, "we are committed to developing alumni who are cosmopolitan citizens of the world."

Center of the Study of Languages and Cultures