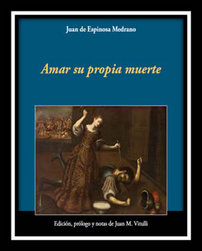 Professor Juan Vitulli has published the book Amar su propia muerte de Juan de Espinosa Medrano. This is the first annotated edition of Espinosa Medrano’s only Spanish play. Vitulli’s edition includes a 70-page introduction and over 400 bibliographical, linguistic and cultural notes. The book was published in 2011 by the Consejo Superior de Investigaciones Científicas  / The Spanish National Research Council (Madrid, Spain) for its collection “Clásicos olvidados” / “Forgotten Classics” The CSIC is the largest public institution dedicated to research in Spain and the third largest in Europe. Belonging to the Spanish Ministry of Science and Innovation through the Secretary of State for Research, its main objective is to develop and promote research that will help bring about scientific and technological progress, and it is prepared to collaborate with Spanish and foreign entities in order to achieve this aim. Through their collaborations, CSIC researchers build up a close network of international relations on a daily basis, while CSIC, as an entity, establishes institutional relations with research organisms and entities in a growing number of countries, and is participating actively in the construction of the European Research Area. The book was published thanks to the financial aid provided by ISLA.