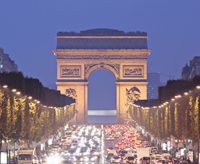 Paris, the legendary City of Lights, is the newest destination for University of Notre Dame College of Arts and Letters students who want to study abroad.

“We are delighted to offer this new opportunity beginning in 2013-14 for students seeking to spend a full year or one semester in Paris.” says Julia Douthwaite, a professor of French in the Department of Romance Languages and Literatures.

Paris has been a capital of high style, art, cuisine, and culture since the 17th century at least and has welcomed many famous American writers, artists, and performers over the years, Douthwaite notes. With hundreds of museums, libraries, archives, and world-famous monuments—as well as the premier sites of French government, education, and finance—the city has much to offer advanced students seeking fluency, cultural immersion, and intensive research opportunities.

“The new exchange program at the Université Paris Diderot will expand existing offerings by allowing advanced students in the humanities to enroll directly in courses with French students at one of the youngest and most dynamic universities in Paris.” 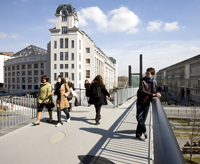 Founded in 2007, Université Paris Diderot enrolls 26,000 students at its campus on the banks of the Seine in southeastern Paris. This bustling neighborhood near the Bibliothèque Nationale de France has a distinct identity all its own—many residents are ethnic Chinese refugees from the former French colony of French Indochina (modern-day Vietnam, Cambodia, and Laos) who speak Cantonese, Vietnamese, and Khmer, as well as French.

Notre Dame students in the new Paris program will study in the university’s College of Letters, Arts and Cinema, which offers a broad variety of courses in French language, linguistics, literature, art history, and film studies “from an excellent group of teacher-scholars whose profile compares well with ND faculty,” Douthwaite says. It may be possible to take courses in other fields as well.

The program is meant to complement, not replace, Notre Dame’s other study abroad opportunities in France, including an intensive social sciences track at Institut d’Etudes Politique (“Sciences Po”) in Paris and the University’s popular, longstanding program at the Université Catholique de l’Ouest in Angers.

Most students in the Angers program study at an institute within the university that is designed specifically to serve the needs of foreign language learners. As such, the Angers program is particularly well-suited for second-year students with intermediate levels of French, Douthwaite says, while the new Paris program is tailored to more advanced language students.

“The broad variety of humanities course offerings makes Université Paris Diderot a ‘must’ for advanced level French majors,” she says. “They will be able to attend a well-regarded French university and take classes with native speakers, all the while doing upper-level coursework that is recognized for the major and supplementary major in French.”

Junior philosophy and chemical engineering major Matt Kibler, a student in Notre Dame’s Arts and Letters/Engineering Dual-Degree Program, is the first to take advantage of the new study abroad opportunity. He will spend spring 2014 semester at Université Paris Diderot.

“My application to the program was driven by my interest in direct enrollment,” Kibler says. “Having already studied French in Tours, France last year through Notre Dame’s summer language abroad program, I was looking for an opportunity that would further push my language skills and develop my linguistic competence. I also hope that the exchange nature of the program will be beneficial insofar as it will open an entire educational system that is in many respects different from the American university system.

“Aside from the chance for academic exploration, I am excited to be living in Paris. The city’s artistic, cultural, and intellectual environment is so vibrant, and the place is so rich with history, that I cannot think of a better city to live in as I college student.”

For more information, contact Professor Julia Douthwaite in the Department of Romance Languages and Literatures, jdouthwa@nd.edu.