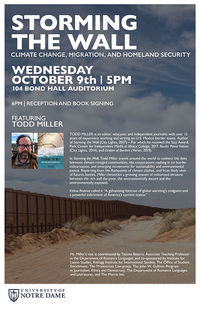 TODD MILLER is an editor, educator, and independent journalist with over 15 years of experience working and writing on U.S. Mexico border issues. Author of Storming the Wall (City Lights, 2017) – For which he received the Izzy Award, Park Center for Independent Media at Ithaca College, 2017, Border Patrol Nation (City Lights, 2014), and Empire of Borders (Verso, 2019).

In Storming the Wall, Todd Miller travels around the world to connect the dots between climate-ravaged communities, the corporations cashing in on border militarization, and emerging movements for sustainability and environmental justice. Reporting from the flashpoints of climate clashes, and from likely sites of futures battles, Miller chronicles a growing system of militarized divisions between the rich and the poor, the environmentally secure and the environmentally exposed.

Kirkus Reviews called it “A galvanizing forecast of global warming’s endgame and a powerful indictment of America’s current stance.”