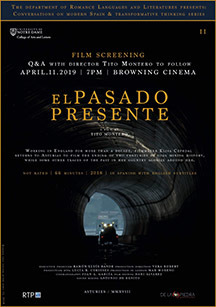 The documentary, in Asturian and Spanish original with English subtitles, will be followed by an informal Q&A with Asturian director,  colleague, and young promise of independent filmmaking of Spain, Tito Montero. He will also be available on campus from April 10-12th.
This screening is part of the SP2019 graduate seminar "Concepts of (Spanish) Modernity." The film primarily deals with the transformation of political subjectivities in the wake of the end of both mining and the unionized/militant proletarian of 19-20th Century Asturias, while at the same time El Pasado Presente bears witness to pre-Modern and popular modes of existence in the region now at risk of disappearance. This movie is partially based on the TV series of the regional channel RTPA called "La Aldea perdida"/"The Lost Village," also by director Montero-- its 14 episodes are available here: https://www.rtpa.es/tpa-programa-todos:Regreso%20a%20la%20aldea%20perdida_111536836184.html
After more than a decade working in England, the filmmaker Elisa Cepedal returns to Spain to shoot a film about the end of the two centuries of history of coal mining and the various remnants and scars it left in the region. El Pasado Presente is the film version of the Transmedia project Return to the Lost Village, which included two programs for television and fourteen online episodes that became the first web series in the history of public television in Asturias, all of which analyze different social and economic realities of life there today. Prior to the feature, Montero’s short film Interrail Mahnmal will play.  This is a free but ticketed event.  Link to the Event here