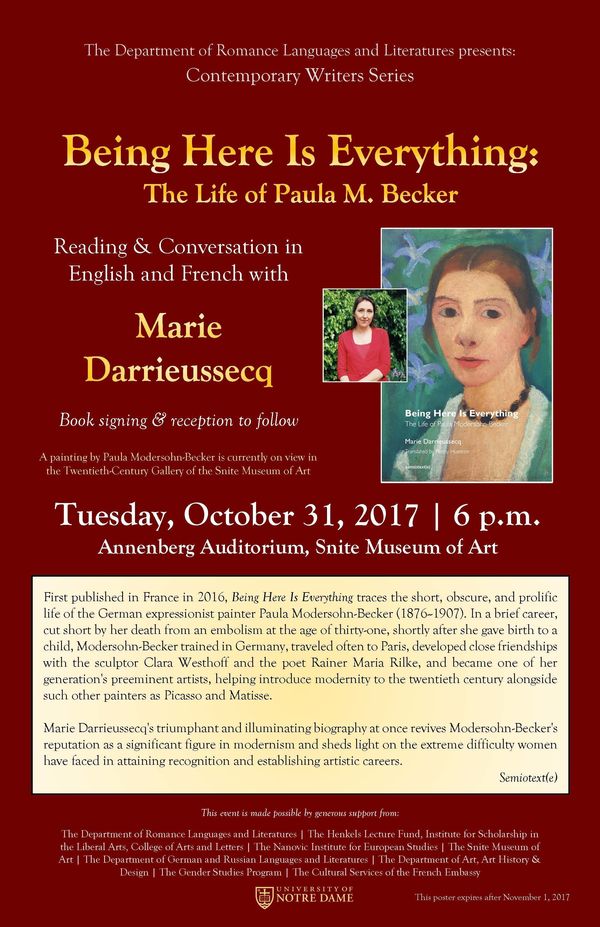 Please join the Department of Romance Languages and Literatures on Tuesday, October 31st, 2017 at 6 p.m. in the Annenberg Auditorium, Snite Museum of Art for a reading and conversation in English and French with contemporary French writer Marie Darrieussecq, who will speak about her book, Being Here Is Everything; a book signing and reception will follow. The Snite Museum of Art has one painting by Paula Modersohn-Becker (Tree) currently on view in the Twentieth-Century Gallery on the second floor.

“First published in France in 2016, Being Here Is Everything traces the short, obscure, and prolific life of the German expressionist painter Paula Modersohn-Becker (1876–1907). In a brief career, cut short by her death from an embolism at the age of thirty-one, shortly after she gave birth to a child, Modersohn-Becker trained in Germany, traveled often to Paris, developed close friendships with the sculptor Clara Westhoff and the poet Rainer Maria Rilke, and became one of her generation’s preeminent artists, helping introduce modernity to the twentieth century alongside such other painters as Picasso and Matisse.

Marie Darrieussecq’s triumphant and illuminating biography at once revives Modersohn-Becker’s reputation as a significant figure in modernism and sheds light on the extreme difficulty women have faced in attaining recognition and establishing artistic careers.” [Description provided by publisher Semiotext(e)]