The Brazil Club would like to extend our warmest invitation to our Brazilian Carnaval events happening on campus in the next couple of weeks. This Thursday, February 23rd, at 6 PM, Professor Marcio Bahia will be hosting a lecture discussing “Hidden Celebrations: Carnaval and other festivities in Northern Brazil” in Room C103 of the Hesburgh Center. 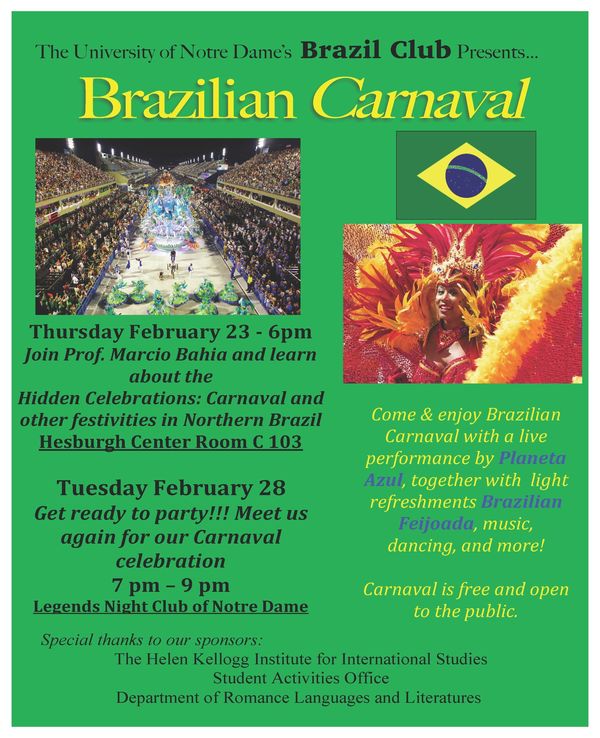 In addition, next Tuesday, February 28th, there will be a Carnival celebration for Terça-Feira Gorda (Fat Tuesday) at Legends of Notre Dame from 7-9 PM, with live music from Planeta Azul, samba dancers, and traditional Brazilian food. These events are free and open to the public, so please come join us as we celebrate Brazilian culture with discussion, music, dancing, food, and fun!

Though the Brazilian Carnival is widely regarded as the largest party in the world, its origins and cultural significance are rooted in rich, diverse traditions dating back to the period of Portuguese colonialism in Brazil. The Portuguese population first introduced Brazilians to the Entrudo, a festival in which people filled the streets, throwing water and flower at one another. Years later, the Entrudo was prohibited in Brazil, causing Brazilians to create new ways to celebrate their culture. Throughout many years, the legacy of the Entrudo slowly fused with African traditions of rhythm and dance and eventually evolved into the Brazilian Carnaval as we know it today. Carnival in Brazil is a wondrous manifestation of both fantasy and illusion commemorated with almost an entire week of decadence and celebration leading up to the start of Lent on Ash Wednesday. During Carnival, revelers all throughout the country unite with opulent costumes, street performances, dancing, samba music, parades and parties through the day and night. Carnaval is not only an incredible expression of joy and unification, but it is also at the very core of Brazilian culture in general.

This year, the Brazilian Carnival will be celebrated officially from February 24th- 28th. Although the celebration in Rio de Janeiro is perhaps the most famous Brazilian Carnival event, many different regions in Brazil host their own unique celebrations. For example, in Salvador, many bands parade through the streets on large trucks called Trios Elétricos, with dancers following behind them. In Recife, revelers join together in the Desfile do Galo da Madrugada (Parade of the Rooster of the Early Hour) to dance the frevo, a very high energy rhythm typical of Brazil. In both São Paulo and Rio de Janeiro, the main celebration occurs in a Sambódromo, a large outdoor venue made specifically for the Carnival. In the Sambódromo, many samba schools compete in a huge parade while presenting various themes exposed through their costumes, dance, music, and carros alegóricos, huge vehicles decorated according to the theme. These samba schools are a very important and prestigious part of Brazilian culture, and they prepare all year for their performance in the Carnival. In Sao Paulo and Rio de Janeiro there are also many blocos, or parades held throughout the streets. These are just a few of the multitude of diverse Carnival celebrations throughout Brazil. In general, the Brazilian Carnaval is an unbelievable show of costumes, dancing, and music that unites the Brazilian people and provides an escape into a world of fantasy.

Brazil’s Carnival is an international celebration that truly represents the very core of the Brazilian culture. The Carnaval events on campus are a great opportunity for individuals to experience a new, perhaps unfamiliar culture and to promote cultural diversity in general. We are incredibly fortunate to have these opportunities to join together as a campus and enrich our cultural knowledge in a fun, interesting way. So again, on behalf of the Brazil Club, I extend my warmest invitation to these events to anyone who is interested in learning about Brazilian culture and the Carnaval. We would also like to thank our generous sponsor, The Helen Kellogg Institute for International Studies, and our supporters from The Student Activities Office and The Department of Romance Languages and Literatures. We hope to see everyone on February 23rd and 28th!