The College of Arts and Letters and RLL is bringing to campus an extraordinary new film: Do Not Resist, with the director and the producer present for discussion.  This stunningly filmed documentary is about the so-called militarization of the police and the accompanying privatization of security in the US context, a well-known legacy of the US experiments in "security" in Cold War hot spots such as Central America.  The film has clearly struck a nerve, winning major awards at film festivals (including the prestigious Tribeca Film Festival, among others), and receiving feature articles in outlets as diverse as the Washington Post, the Village Voice, The Guardian, WNYC, VICE, the Daily Beast, NPR, the New York Times, the Bill O'Reilly podcast, Foreign Affairs and Business Insider. 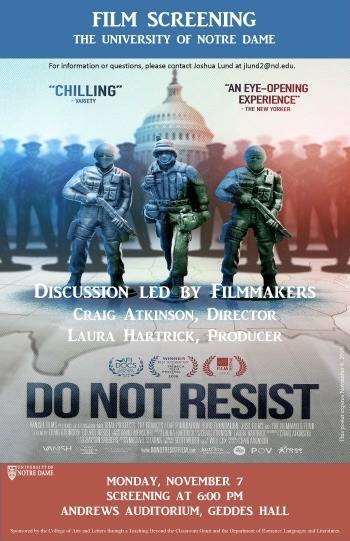