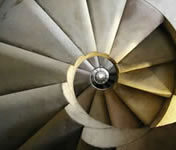 The requirements for a major in Romance Languages and Literatures include competency in two languages and successful completion of 36 credit hours or 12 courses at the 200 level and above, distributed equally between the two respective language programs as follows: