Our faculty and students are a dynamic community of scholars dedicated to knowing the world through languages—and celebrating the intellectual, artistic, and cultural expressions at the heart of Western Civilization.

This course celebrates the language of Kreyòl, and the cultures and histories of its speakers. Those looking to develop or improve their language skills and/or to work, volunteer or conduct research in the Caribbean or the Caribbean diaspora are also invited to enroll.

Ph.D student Paola Uparela is the recipient of the Shaheen Award in the Humanities

Paola specializes in Transatlantic Early Modern literary and cultural studies centering on issues of gender, race, bio-politics, and visual culture; her dissertation was directed by Professor Carlos A. Jáuregui.

Celebrating the class of 2020

Learn about the graduating class of 2020 including this year's department award recipients.

Congratulations to our PhD student Valeria Mora Hernandez who has been named one of the Nanovic Institute's Graduate Fellows in European Studies for the coming academic year.

Carlos Jáuregui, Associate Professor of Spanish has released a new book titled Espectros y conjuras. Asedios a la cuestión colonial. The book revisits Derrida's notion of conjure (as exorcism, invocation and conspiracy) to speak of a series of texts that symbolically try to subjugate the “Other” to the order of writing, triggering a sort of return of the repressed (i.e., otherness, violence, horror-- exorcized by the text-- return as textual ruptures and anomalies).

More about the book

Check out the current edition of our annual Newsletter. 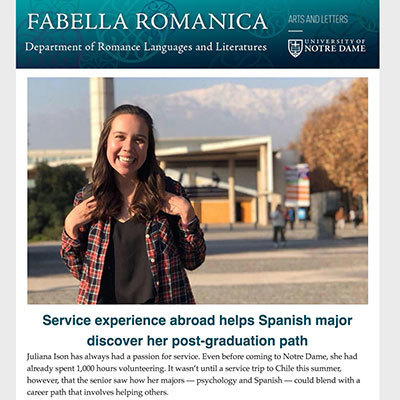 Last fall, The Office of Communications, visited the Notre Dame Career Expo and spoke with a number of recruiters about hiring liberal arts majors and the skills they bring to a company

The ability to speak more than one language is critical to succeed in business in Europe, Asia, and Latin America, according to 88 percent of executive recruiters from those regions.

The University has further extended its engagement with Italy with an interdisciplinary program in Italian Studies.

The Center for Social Concerns offers the Community Engagement Faculty Institute for all who want to...

Drawn together by a shared interest in the culture and people of Italy—past, present, and future—the...

The William & Katherine Devers Program in Dante Studies at the University of Notre Dame supports...

Founded in 1999, the Institute seeks to enhance interdisciplinary study and research in Latino studies...

The Medieval Institute, founded in 1946, coordinates the teaching and research of the largest contingent...

The Nanovic Institute is dedicated to enriching the learning experience at Notre Dame by supporting...