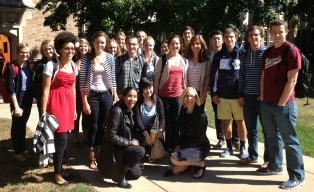 Because it is the most practical language: in a 2008 list of international jobs distributed by the U.S. State Department, the ability to speak French was required or preferred for nearly 40% of the positions.Beyond cultural sensitivity and social adaptability, the many benefits of language study include heightened abilities in research and data analysis, critical and analytical thinking, problem-solving, communication, memorization, and organization. Such skills are highly valued on the job market, and professionals who are fluent in more than one language and informed of other cultures increase their career options.

French is one of the few languages that are useful throughout the world and in the United States. Knowing it greatly enhances opportunities in government, international relations, business, banking, international trade, international health care, international law, education, academia, journalism, scientific research, technology, the military, communications, and social service, among other areas.

Did you know…? French is spoken regularly by 200 million people worldwide. Approximately 80 million more are learning the language by over 250 million. French is the official language of 33 countries, and 56 officially belong to La Francophonie, the association of French-speaking nations. Learn more>

Learn more about the French major>