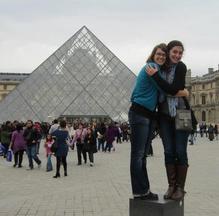 The Louvre in Paris is a place to celebrate all things French!

When you decide to study French at Notre Dame, you’re choosing a language that can truly be described as “global.” French is spoken regularly by close to 275 million people worldwide. And it is an official working language of the United Nations, UNESCO, the International Monetary Fund, the International Olympic Committee, the Council of Europe, and the European Commission.

You’re also choosing a language that is intimately connected with the history of Notre Dame. When Rev. Edward Sorin, C.S.C., a French priest of the Congrégation de Sainte Croix, founded the school in 1842, he named it l’Université de Notre Dame du Lac—The University of Our Lady of the Lake. The language and literature of France, which were an essential part of the University’s initial curriculum, have enjoyed great popularity on campus ever since.

Since the 1990s, the French Program has expanded to include the study of Francophone literatures and cultures. At the undergraduate level, it offers a first and a supplementary major. Since the 1930s, the University has offered a Master's degree in French. Through the Literature Program, a Ph.D. degree is also available.

For nearly 40 years, Notre Dame has operated an international study program in association with the Université Catholique de l’Ouest, one of France’s premier regional universities, in Angers, the heart of the Loire Valley. Notre Dame also offers an exchange program with Institut d'Études Politiques de Paris - better known as Sciences Po and since 2013 it offers an advanced immersion program at Paris Diderot in the host college U.F.R. Lettres, Arts et Cinéma (LAC).

Video Student Spotlight: Anne Seul and her research on Diderot in Paris

Notre Dame runs a chapter of the National French Honor Society, Pi Delta Phi, which holds an induction ceremony every year. The Program also offers an Honors Track in French.

Students benefit from exciting opportunities outside the classroom, such as the French Theatre Production and the student club Le Cercle Français, to practice their skills.

There are many advantages to studying a foreign language, essentially the development of skills that are of high value on the job market, where globalization is the keystone for major corporations. Learn more>