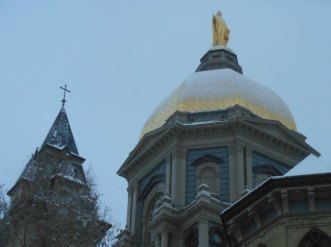 The Golden Dome atop the Main Building on campus

Skills:  Students graduating with a major in French will be able to communicate effectively, clearly and cohesively in both written and oral French discourse. They will develop modes of analysis and ways of critical, interpretive, and creative thinking that may be applied to a variety of career paths and the world at large.

Knowledge:  Students will learn about French and Francophone language, literature, and culture within an historical framework. They will acquire a strong foundation for successful entry into and completion of the country’s most elite graduate programs in French.

Dispositions:  Students will learn to respect difference and diversity both in the context of their own culture and globally. They will develop an intellectual engagement and reflective sensibility that will contribute to their life-long learning and continued engagement with French studies.

Learn more about the French major

Students will be able to understand spoken language, even when delivered at native-level speed, on advanced subjects. They will be able to comprehend a range of recorded audiovisual materials in French (film, television, online media, etc.), including those which contain idiomatic usage, to follow propositionally abstract and linguistically complex lines of argument, and to synthesize and paraphrase the ideas and details of extended speech and academic lectures.

Students will be able to express themselves clearly, accurately and effectively in a variety of communicative contexts and situations. They will be able to sustain an advanced level of spoken interaction with native speakers in academic, professional and informal settings; to deliver well-organized, logical oral presentations with few errors in usage; to formulate and support ideas and opinions, and to respond to complex lines of reasoning.

Students will be able to write clearly, precisely, and cohesively using the disciplinary conventions and methodologies that constitute effective literary analysis. They will be able to frame and sustain an argument that includes both the exposition and analysis of information; to demonstrate competence, fluency and clarity of expression, with minimal interference from English, and with a good range of vocabulary and syntax. They will be able to incorporate a wide range of expressions and rhetorical forms in their written work(persuasion, etc.) with attention to register and nuance of meaning. They will be able to assess and edit their own critical writing and that of their peers.

Students will be able to evaluate and interpret texts through a range of critical approaches (stylistic, historical, intertextual, etc.). They will be able to apply analytical skills to the interpretation of a wide spectrum of cultural phenomena including art, film and popular media; to decipher implicit meanings beyond the surface level of words, sentences, characters, and plots; to evaluate well-argued secondary sources and use them to help formulate their own arguments. They will be prepared to assess the claims of competing interpretations of a literary text and discern poorly articulated points of view.

Students will be able to support their judgments with textual evidence, bibliographical research and relevant secondary sources. They will be prepared to appraise the merits of ideas and materials from a variety of bibliographic sources, to differentiate between popular and scholarly material, to understand the principles of thorough and scrupulous documentation of secondary sources in order to avoid plagiarism, and to apply the standard citation format of literary studies (MLA).

Students will learn to identify different stylistic devices, rhetorical tropes and rules of versification and to evaluate their function within the text. They will be able to apply appropriate critical and theoretical terminology in the analysis of texts.

Students will become familiar with major literary, artistic, and cultural figures of the French-speaking world and their principal works. They will be able to distinguish the principal characteristics of major trends, periods, and movements in the French and Francophone literary traditions. They will be exposed to different approaches, principles, and schools of literary analysis (e.g. stylistic, historical, intertextual analyses). They will be able to recognize the limitations of such categorization and to understand that conventions and canons may be questioned.

Students will be able to recognize key terms specific to the intellectual and cultural heritage of the French-speaking world. They will be able to situate literary works in the context of their historical, cultural, and aesthetic traditions; to demonstrate knowledge of significant historical events that have influenced French and Francophone literature and culture across the centuries and to consider relationships between culture, music, art, philosophy, society, history, politics, religion, and economics in the production of texts. They will be able assess the importance of Catholic intellectual and cultural traditions in French and Francophone literary works.

Students will become aware of the linguistic, ethnic, racial, religious, cultural, and social diversity of the French-speaking world. They should be able to recognize the points of contact between the French-speaking world and the United States, to reflect upon how cultural values evolve across time and how these values shape perceptions, practices, and texts; and to consider issues of colonization, globalization, race, and ethnicity in their French and Francophone contexts. They will recognize the extent to which French and Francophone cultures reflect Catholic intellectual and cultural traditions.

Students will learn to recognize and respect ethnic, linguistic, racial, and religious difference and to engage the perspective of others to better understand and critically reflect on their world view. They will be able to discuss contemporary ethical issues related to France and the Francophone world, and to act with informed awareness of contemporary issues in their historical contexts.

Students will develop an appreciation of the aesthetic value of literary and cultural artifacts from all periods. They will be able to understand that this aesthetic appeal is related to the context of a work’s creation. They will develop a heightened sensitivity to figurative language, rhetoric, and imagery that they encounter in everyday life.

Students should be able to discover meanings and solutions for themselves through active participation in their own learning process. They will be able to adapt the knowledge and skills they have learned to new experiences and learning opportunities, to integrate multiple ways of knowing into their daily lives, and to develop attitudes and habits of thought and study that encourage a life-long interest and continued engagement in French and Francophone studies.